On grid - Off grid generators

In August 2016 Douglas from the KF travelled to Washington to set up a demo of a hybrid generator which worked off grid. Below is a clip of it working before he travelled. Unfortunately two parts broke en route to the live public demo near the White House.  To a sceptic this seems 'unsurprising', but we are certain of his truthfulness and authenticity. He is a genuine and generous researcher.  This generator was based on the original Magrav reactor, but he had worked out how to get it to be self looping by using two different sized fridge compressors.  The fact that the system was fragile enough to break meant that although the blueprint is published (below), it wasn't taken any further since a new solid state generator was in development as well, just using GANS and copper coils.
​See also this Article.

How it works (from KFwiki site):  The hybrid magrav generator creates a condition of imbalance in-acted by compressor motors. An energy exchange of charging and discharging on the coils of the compressor motors creates the imbalance and the Plasma flow works to keep the condition balanced. Initially, we supply the whole circuit with an external AC supply to initiate a state of rising strength and a charging of the coils, which initiates the electrical energy flow from the source to the load. This kickstarts the whole system. Plasma, from the Plasma capacitors and magrav coils, then starts to flow towards whatever is in lowering strength (compressor coil discharging, lights - doing energy conversion, etc). Since the two compressors are connected in a complementary manner, reversed with respect with each other, each will always operate in an oppositional state to each other (while one is charging or rising in strength the other in discharging or lowering in strength). This is an agreeable energy exchange condition for the use and application of Plasma energy. The condition creates an on going flow of Plasma energy to the whole circuit. Removal of the initial AC supply will not cut off or stop Plasma flow. The exchange is on going and the mechanical action of the motors does not stop instantly when the AC supply is removed. Moreover, adding more load (for example more lights) creates an increase in energy conversion from electrical energy to light energy and a lowering strength condition in the circuit. As a result, the flow of Plasma will increase to compensate the increased demand. The more load added to the circuit, the more energy you get from the Plasma. Energy is not lost at all; it is converted at the point of conversion by the load.
​

This is the paradigm buster of course.  To see a shoebox producing unlimited power from a standing start and no 'external' power source is fundamentally challenging to our concepts of the so called laws of physics, and also other more deeply held belief systems.

There are now several established and verified 'over unity' devices worldwide, and so the cat is truly coming out of the bag after years of suppression and dead ends. In truth the timing is as much to do with humanity's general readiness and need as to dirty tricks. Perhaps rather than rail against the injustice we can see it as the necessary resistance whilst we become ready for this next stage in clean and abundant resources  ...

There is possibly still a difference between Mr Keshe's system and others however, in that the new PPG works on implosive plasma physics, whereas other systems are still 'explosive'.  Either way it is very exciting.

The drawback with the Magrav reactor, is that the results are hard to establish immediately, and are fairly dependent on certain criteria being met.  It is on-grid and is supposed to produce savings on the monthly bill once the house is conditioned by it. Sometimes these results have been elusive in terms of raw power, though much better with the new PEU.   Most people do however also feel the benefit of the plasma fields in intangible ways, such as increased well being and need for less sleep or food.

However, the off grid version will be easy to assess, it either produces useable power at the load end, or it doesnt.  The units went on sale in July 2016, but are not ready to deliver yet. As with any pioneering new technology the production stage has been delayed on a practical and political level. An announcement was made on 23rd March 2017 in 164th Knowledge Seekers Workshop, that 900 units that achieve up to 70% direct power have been dispatched for final testing, and 6 units that achieve 100% supply to any load demanded.  Whilst the off grid generator (PPG) had problems giving too MUCH power and they had to resolve how to limit this, to more like 40kW, which is more than enough for a typical house, and is in fact feeding about 20 houses up stream.

Obviously seeing is believing and if these really do as they say on the box, then the world will never look back.  Many times generators have been successfully made that either use the dynamic field potentials of plasmatic fields, or achieve resonance with radiant universal energy fields, or employ reactive energy vectors, but the KFssi are the first organisation to promise an open sourced public product....  fingers hugely crossed.

You can see the product here for purchase, no blueprints or teasers are available yet.

​For links to other off grid devices that are on or very close to market by other teams click here. and scroll to bottom.
​
Image of a solid state Magrav blueprint in honour of Fabio Alonso, who tragically died last year in suspicious circumstances.  His girlfriend Naomi who was also in the accident has made a miraculous recovery from otherwise fatal injuries thanks to her father's knowledge and use of plasma medicine. 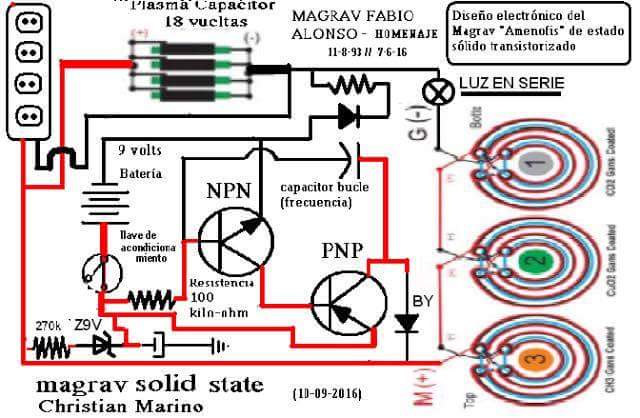 Discussion about technical points etc for off grid Plasma Generator Unit.  May 2017