​What are Nano Particles?

by Oz Camero, and from Lighthouse Emporium
If we heat the copper, or expose it to a strong alkaline (which at pH12 has an electrical potential of -400mV),  the bonds between the atoms begin to loosen to a point at which they become individuated, or nano state. They are still in a matter state but as individual atoms aligned in the upper layers of the metal plate. ​​This is very similar to GANS as explained in the previous pages, however GANS is a balanced state where they are not attracted to anything. While the Nano particles are not attracted to each other, they are still attracted to the copper plate that they originated from, therefore they are stuck to the plate, creating a Nano coating. We will go deeper into this explanation later. 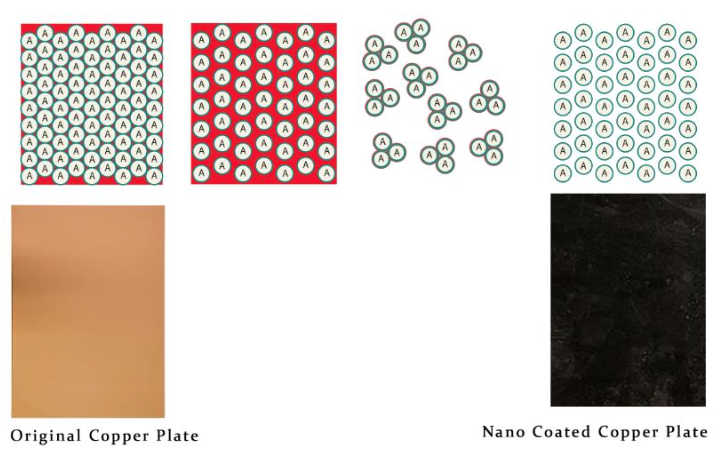 Balanced vs. unbalanced
Everything in this universe is about a balance of both polarities positive and negative. When we are dealing with something that is balanced it contains both polarities where something unbalanced contains one polarity and requires the opposite polarity to complete it.  We know that the copper plate is nothing more than many atoms that are held together through their fields to create the solid physical matter. In this case the copper plate is of a positive polarity. We can compare this to a magnet. We know that a magnet has both a positive side and a negative side. We can see that if we were to take two magnets and point the same poles towards one another, what we end up with is repulsion. The magnets will push away from one another. If we were to flip one of the magnets so that we are dealing with the positive of one magnet and the negative of the other, the magnets will find balance and stick together.

From metal to Nano
When we look at a piece of copper wire in its original state we will say that it has a positive charge. When we heat up the copper the outer layers will go from the solid state to a liquid followed by a gas and then start to separate and release from itself. Once this happens, the polarity on the Nano particles flip from positive to negative. What happens when we introduce positive and negative? They stick together remember? Now what we end up with is a copper wire that has a positive charge with negatively charged Nano particles stuck to it. We would see the first layer stick to the copper wire because we are dealing with a positive wire and a negative Nano particle, however the second layer and every layer after will not touch.
​All of these Nano particles are negative polarity, and like a magnet they will push away from each other. However, because the copper wire has a stronger gravitational field than the individual Nano particles, they will all be pulled towards the copper. What we end up with is layer upon layer of Nano particles that are attracted to the wire but repel from one another.
​When using electricity we are dealing with the exchange of an electron from one atom to another and this exchange in matter creates heat. The nano layers are highly insulative to electron flow.  In order to send many electrons down the wire at a high rate of speed we would create a lot of heat and then need to cool the components. Because of that, much is spent in terms of resources to reduce the temperature to the point where this is not a factor. MAGRAV does not deal with electricity therefore this is never an issue.
In this case salt water becomes our vacuum cleaner. When we submerge the Nano coated plates in a salt water solution, the Nano particles find balance in the salt water and release themselves from the plates. When this happens they interact with the fields that are already in the water from H2O to whatever elements are in the water already. If you have another copper plate on the other side of the bin, you end up with H2O and Cu. As the Nano particles are released into the water, their fields interact with all the fields in the water and the result is a balanced field that creates what is known as GANS. When we use different plates or add sea water we change the fields in the water to create different field combinations which in turn create different types of GANS.
Nano particles as a conductor
When it comes to using Nano particles as a conductor, we have to refer back to the spin that is involved with the fields of the individual Nano particles. When we look at the figure below we see that Nano particles are pulling fields in and then pushing them back out. GANS on the other hand is operating more like a light bulb or as Keshe refers to them as miniature suns. They are radiating their fields outwards like a sun. The GANS particles replicate the physical sun where the fields they are radiating would be the rays of light being sent out into the universe. When we combine the GANS and its fields with the Nano particles we see that the Nano particles take on the fields of the GANS and transmit it like a signal.
GANS is sending fields out and Nano particles are sucking them in and pushing them back out. In this case GANS is the power source and the Nano particles are the conductors to transmit the fields of the GANS to wherever we would like to send them.
On this nanocoated line we have applied a GANS of CuO to the left hand side, the fields are then picked up by the surrounding nanoparticles and then the fields are shared down the line.  think of nano coating as a radiator of harmoniius fields, and it will atune everything it comes in contact with. 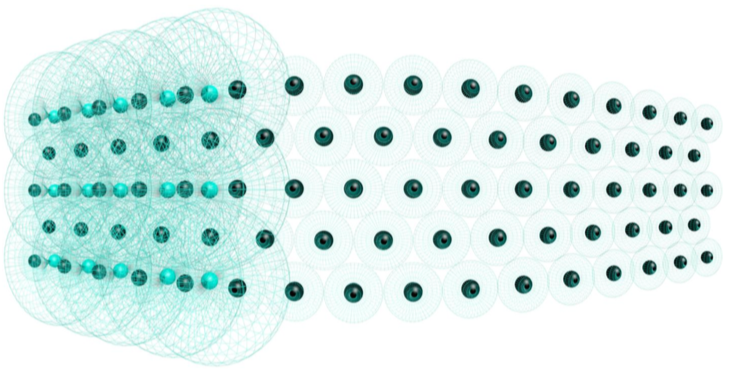 ​Nano particles are an essential part in the production of Plasma based devices using the understanding provided by the Keshe Foundation. These particles are used to transmit fields, restructure fields and have a wide variety of uses including free energy, transportation, health care, food applications and much more, so get out there and start building. There is a very large community of people looking to build and help one another with their projects.